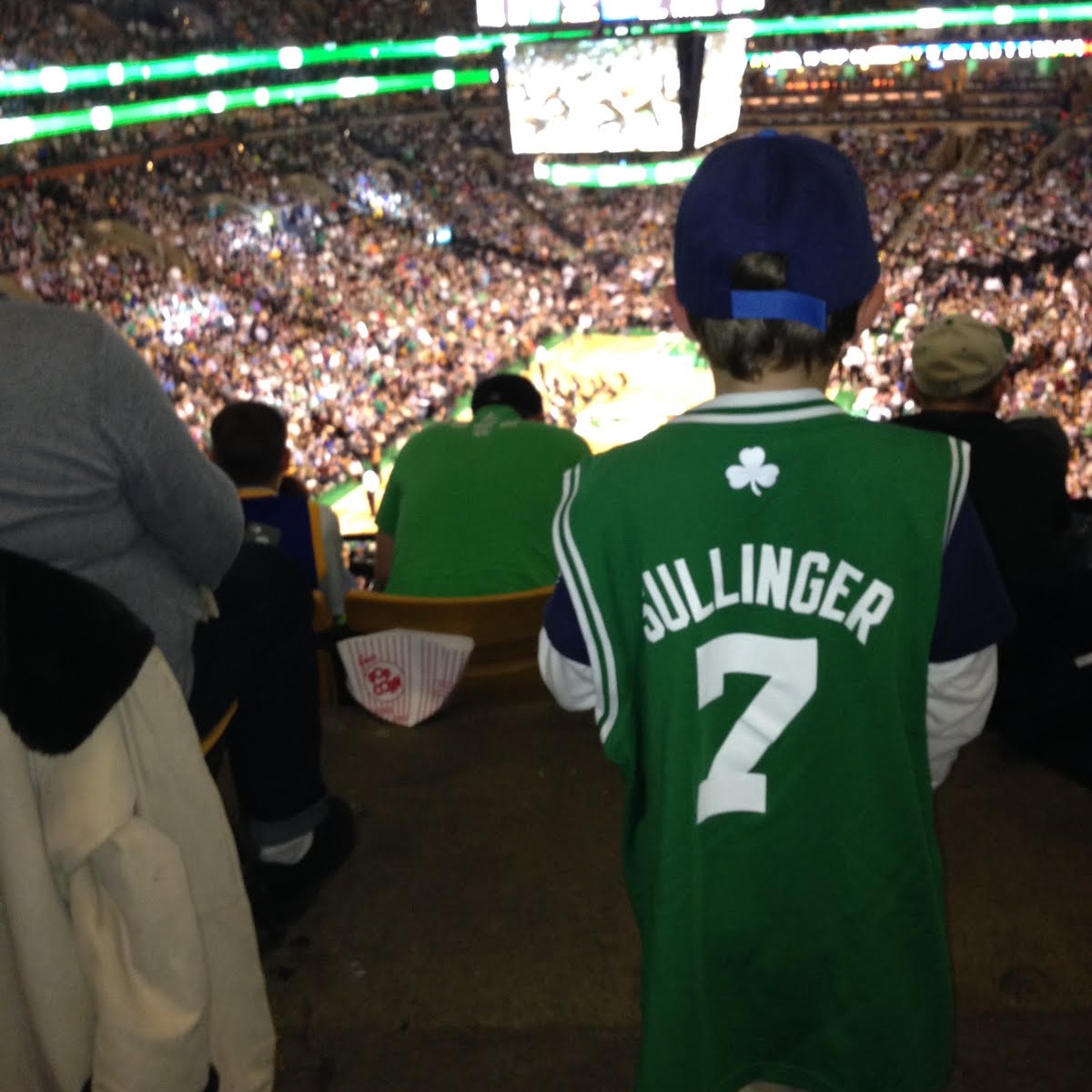 Like many kids his age, my son takes his sports very seriously, always putting 100% enthusiasm behind his favorite teams.  And Boston is a serious sports town.  My wife and I joke that it took him just 3 months in Boston schools to convert from a laid-back tie-dyed California kid to an angry Boston sports fan.

Also like many kids, my son’s favorite teams are constantly changing.  One year, he’s cheering on the New England Patriots over the Falcons, the next year he’s rooting for the Philadelphia Eagles over the Patriots!  It’s quite an effort just keeping up.

As a Dad, I’ve decided that I’m going to root for whatever teams my son is rooting for.  “You’re rooting for the Eagles?  Awesome, me too, buddy.”  “You hate Tom Brady?  Super, I can get behind that.”  “Celtics or Cavs tonight?  Alright, I’m on your side.”  I cheer for whoever he’s cheering for, whether I love them or hate them.  Here’s why…

It’s the classic clash between team loyalty and family loyalty.  We all have our sports allegiances, and our personal histories that created them.  We also have family loyalties that, in most circumstances, are more important.  But I’ve seen plenty of divided families when it comes to watching sports.

On one hand, we value consistent support for the same teams, through thick and thin.  Nobody wants to be a fair-weather fan.  On the other hand, we want to be a family unit, supporting and pulling in the same direction, even our sports teams.

What do you do when your son’s preferences are — hypothetically speaking, of course — all over the damn place?  Do you flip flop with him, even when he flips to a team you hate?  Or do you stick with your team, no matter who he likes?

In sports, it’s an easy choice for me: family loyalty dominates team loyalty every time.  The world is hard enough as it is, without my son’s Dad rooting against him.  He needs to know that I have his back, no matter what, even if the rest of his class is rooting for the other team.  I’m right there beside him in full support.  I’m the leader of his wolf pack, and he’s protected.  We’re in this together.

Prime example: This past Spring, the Boston Celtics played the Cleveland Cavaliers in the NBA Eastern Conference Finals 2018.  We’re big Celtics fans in this house, living in Boston.  We were headed into Game 7, hoping for victory over King James.  My son even dressed up in a suit to be like Celtics coach, Brad Stevens, as we watched the game on the big screen TV at home:

Legitimate tears were shed when the Celtics lost.  It was awful to watch how sad my son was at the Cavs victory.  He wanted the Celtics to win sooooo bad, but, as many teams know, stopping Lebron when he’s on fire is practically impossible.

The very next morning, as we are heading out to a birthday party, my son puts on a Lebron shirt: 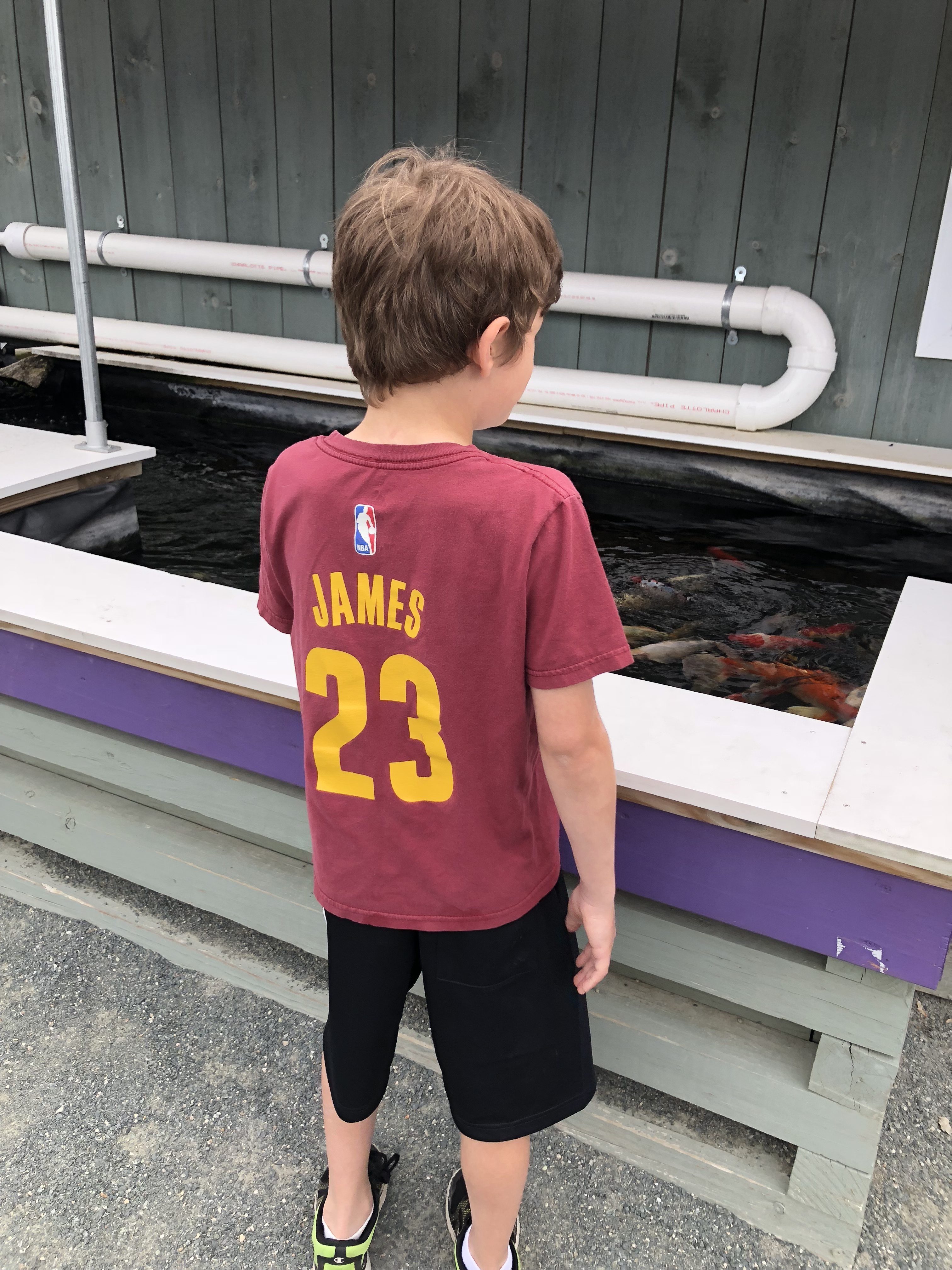 Not everyone will agree with this approach.  I got into a lively debate about it with several friends of mine a few months ago.  They presented a strong argument for the opposite view: kids need to learn that Dad doesn’t always have to agree, and that we can co-exist and love each other while rooting for different teams.

After presenting a very lawyerly case for this perspective, one of my childless friends laughed and said, “Says the guy with no kids to the guy with four kids.”  But it’s a valid perspective that many people agree with and that I think has merit.

On one hand, you want your child to know that you stand for something, that you stand for your team through thick and thin, that you don’t always have to agree with your kids in order to love them.  On the other hand, we want to be supportive of our kids.  The world is a nasty place, and it’s hard enough without their Dad rooting against their favorite team of the moment.

Maybe it depends on which lesson we want to emphasize.  Do we teach our children that we love them no matter what, even when we have differences of opinion?  Or do we teach him that we’ll be on their side, no matter what choices they make? Both are good lessons, I think, but rooting for or against our kids’ favorite teams necessarily prioritizes one lesson over the other.

As a general matter, I don’t always support my sons’ choices.  When he’s “choosing” not to do his homework or “choosing” to be a nasty older brother, I come down strongly against him.  There are principles of being a good person that are non-negotiable, even for parents who like a good negotiation with their kids.  But when it comes to who we’re rooting for, he knows I have his back.  “I’m on your team, son, no matter what.”

It took guts for my son to wear an Eagles hat to school the day after they beat the Patriots in Super Bowl LII.  That’s pretty much insane in Boston.  Here’s a worksheet from his “Religion” class at school: 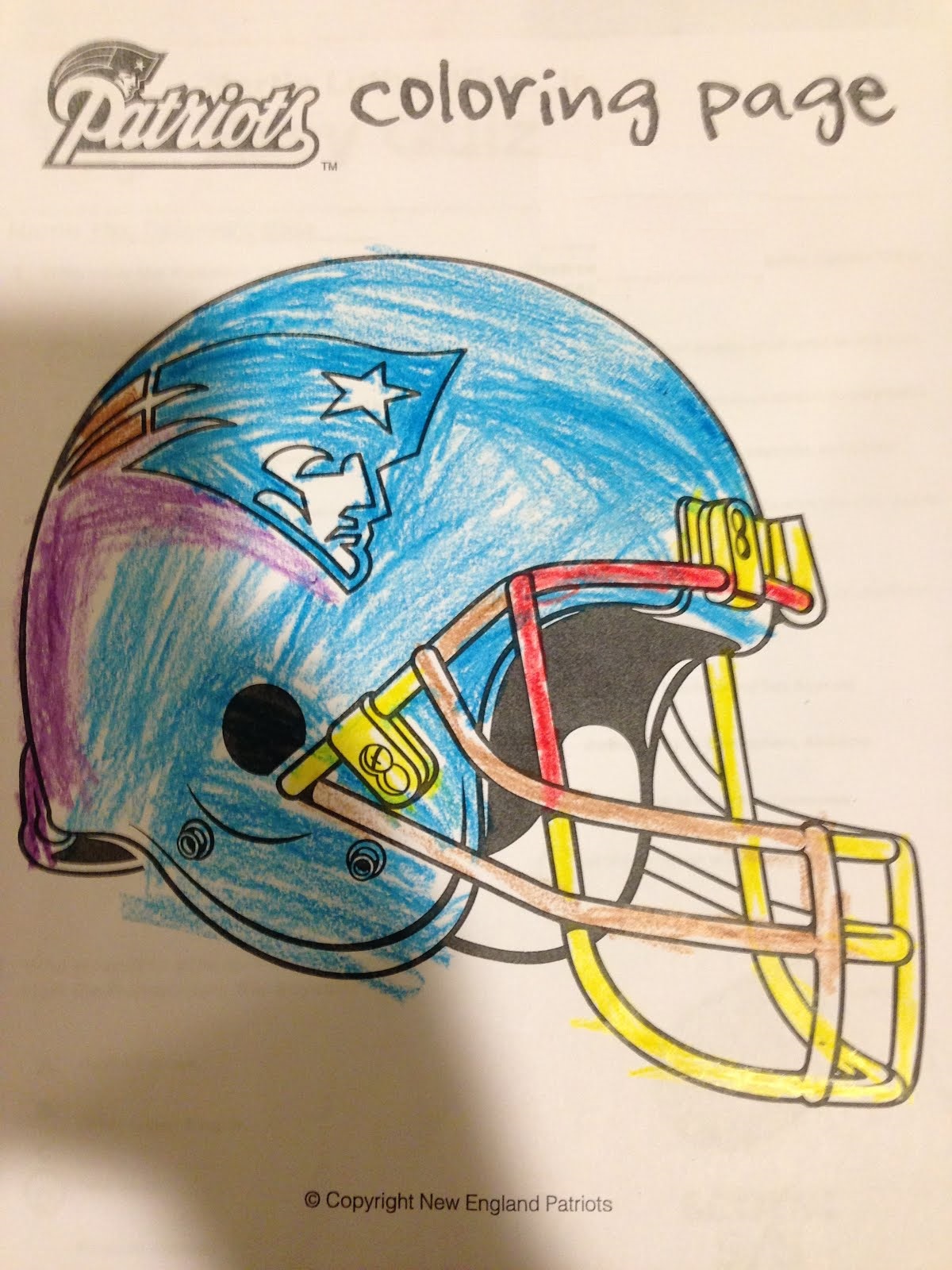 My son is lucky he didn’t get his head dunked in the toilet!  But he’s loud and proud for the teams he roots for, no matter how recently he’s switched sides.  And he doesn’t need his Dad ragging on him too — I’d rather him come home to another Eagles supporter than another hater.  Since I don’t personally care very much about who wins, why would I root against him?

All of that flip flopping, though, does make for some curious situations.  A few years back, we went to see the Red Sox play the Orioles at Camden Yards, my hometown team and childhood stadium.  So who do we root for, the Red Sox (our current home) or the Orioles (my childhood home)?  Answer: We share gear and root for both teams (although we still scream out “O!” during the national anthem – at least I do). 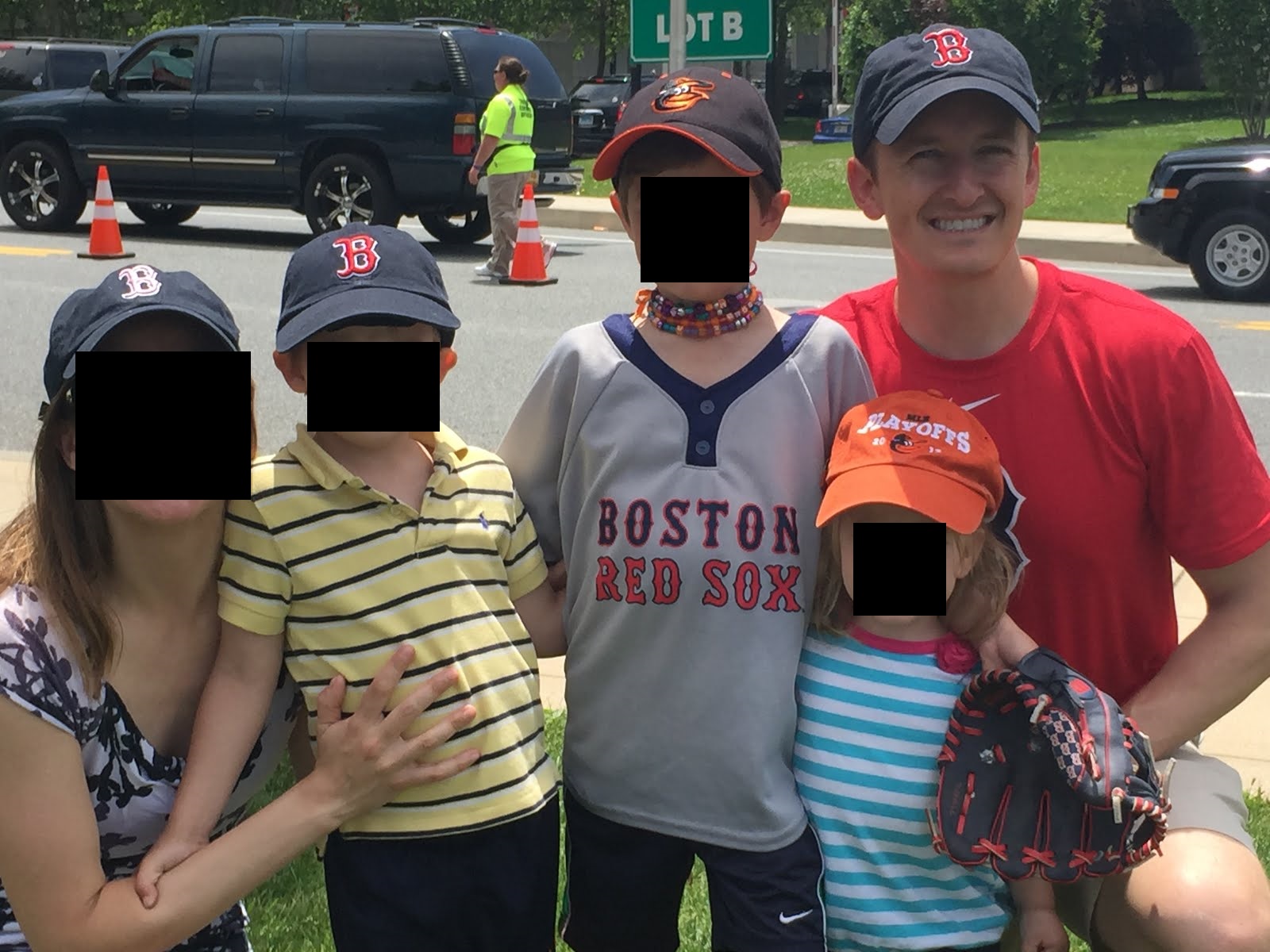 I don’t think many folks would argue that sports loyalties are more important than family loyalties (except maybe in Boston or New York?). But I see enough families rooting for separate teams to know that they don’t mind razzing each other when Alabama beats Auburn, Army beats Navy, or Harvard beats Yale.  For me, a sports rivalry with my son is something that I just don’t need.  Even if the world isn’t on my son’s side, at least his Dad is.

Future article: What to do when your two sons are rooting for different teams?  At least I don’t have that problem…yet.

Readers: Do you think you should root for your son’s favorite team, or your own favorite team?  What circumstances favor one over the other — maybe age, sport, or whether he’s rooting for the Yankees?