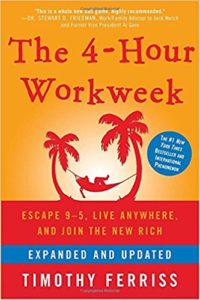 Companies are starting to embrace the shorter workday.  I think this is one of the best workplace trends over the last two decades.

For example, I read an article yesterday about Tower Paddle Boards implementing a 5-hour workday for its employees:

So while we operated on a standard eight-hour workday at first, just like most other companies, I wanted to put my theory to the test. And it also seemed like freeing up employees’ afternoons for the outdoor lifestyle the company promoted would be a natural fit. So on June 1, 2015, I initiated a three-month test. I moved my whole company to a five-hour workday where everyone works from 8 a.m. to 1 p.m. Over a year later, we’re sticking with it. Here’s why, and how we made the change work.

The CEO wisely recognized that humans aren’t machines — our productivity declines the more time we spend in the office:

The case against ballooning hours is familiar to most and doesn’t need to be rehearsed. Humans aren’t machines; productivity declines the longer you spend with your nose to the grind. On the flip side, it’s been found that happier workers are more productive.

But to me, the more compelling argument is that we are healthier, happier, and lead better lives when work does not drown us.  Having a predictable, reasonable work day gives us the emotional strength and energy to persist and succeed.  The CEO writes:

Having time to pursue your passions, nurture your relationships, and stay active gives you more emotional and physical energy overall—including to do your job well.

An important caveat, of course, is that top-performers need to go above and beyond when it really matters.  To address this, Tower Paddle Boards doesn’t doesn’t forbid this type of over-delivery when the stakes warrant it:

Don’t restrict yourself to a 25-hour week. My employees know they can always walk out of the office guilt-free at 1 p.m., and most do most of the time. But it isn’t forbidden for the occasional high performer to still put in a 12-hour day when it’s really crucial. The key is that those crunch periods remain the exception to the rule—which you need to hold up in spirit, not enforce to the letter.

In my consulting work, I know that there are some critical, make-or-break time periods.  I tell new employees that we will be insanely busy 3 months out of 12 months — we just don’t know which 3 months those are in advance. During those 3 months, you have to do whatever it takes to get the work done.  The rest of the year, I encourage having a balanced orientation towards work during the slow times so that we can really rise up and adopt a whatever-it-takes mentality when it really counts.  In other words, don’t get burned out during the down periods, because we’ll need you to be fresh when it really matters.

Other companies are flirting with shorter work weeks as well.  Take Amazon (“Amazon Tests 30-Hour Workweek“), who recently reported experimenting with a 30-hour workweek for many of its employees:

The Washington Post reports that Amazon is launching technical teams whose workers will only clock in for 30 hours a week. While plenty of employees at Amazon are part-time, the novelty here is that the teams are entirely made up of workers on a reduced schedule, including managers. The teams’ members will receive the same benefits as full-time employees, and 75% of a 40-hour workers’ pay.

The stated goal of the program is “to create a work environment that is tailored to a reduced schedule and still fosters success and career growth.” The initiative was accompanied by an event last week titled Reinventing the Work-Life Ratio for Tech Talent.

Similarly, don’t get me going on Tim Ferriss’s masterpiece, The 4-Hour Workweek.  I could write entire posts on this book (and likely will do so), but he fosters the notion of the New Rich, who have control over their time rather than their money, per se.  It’s exactly the same idea: killing ourselves at work, especially in terms of hours, is not the path to living a good life.

The shorter workweek is not a new concept either — for example, see John Maynard Keynes’s essay, “Economic Possibilities for our Grandchildren” from 1930, where he discusses how we will approach work when we achieve a state of economic abundance:

Let us, for the sake of argument, suppose that a hundred years hence we are all of us, on the average, eight times better off in the economic sense than we are to-day. Assuredly there need be nothing here to surprise us.

Now it is true that the needs of human beings may seem to be insatiable. But they fall into two classes – those needs which are absolute in the sense that we feel them whatever the situation of our fellow human beings may be, and those which are relative in the sense that we feel them only if their satisfaction lifts us above, makes us feel superior to, our fellows. Needs of the second class, those which satisfy the desire for superiority, may indeed be insatiable; for the higher the general level, the higher still are they. But this is not so true of the absolute needs – a point may soon be reached, much sooner perhaps than we are all of us aware of, when these needs are satisfied in the sense that we prefer to devote our further energies to non-economic purposes.

For many ages to come the old Adam will be so strong in us that everybody will need to do some work if he is to be contented. We shall do more things for ourselves than is usual with the rich to-day, only too glad to have small duties and tasks and routines. But beyond this, we shall endeavour to spread the bread thin on the butter – to make what work there is still to be done to be as widely shared as possible. Three-hour shifts or a fifteen-hour week may put off the problem for a great while. For three hours a day is quite enough to satisfy the old Adam in most of us!

In other words, satisfy your inner desire to progress, to grow, to build, to create — but limit it to a few hours every day.  Beyond that, seek greater meaning, leisure, and fulfillment to the best of our ability.  There is a time and a place for hard work, no doubt about it, but this movement towards a shorter week strikes me as more than a trend — it is the future of work.