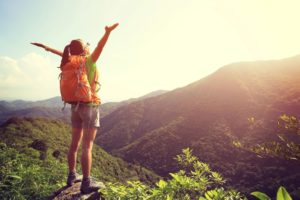 Have you ever given up on being “the best”, settling for “good enough”?

Growing up in the one of the wealthiest societies in the wealthiest time period in the history of man, we are constantly told to “Shoot for the stars”, “Follow our dreams”, “Don’t settle”, and a variety of other phrases aimed at becoming great. We celebrate athletes, celebrities, entrepreneurs — those who have gone “all in” on their specialty or discipline of choosing. We foster the idea that settling for an “average” life or merely a “good” life is a disappointment, not something to strive for.

But what for? Why must we be great? Why must we be special? By pure math, only a few of us can be at the top of the distribution. Only a small percentage of us will be great and admired by the rest. But that’s perfectly okay! For most of us, it’s time to stop aiming to be the best, and simply aim to be good enough.

I get it: you’re a type A personality that thrives on achievement and accomplishment. You feel good by accumulating trophies on the shelf and showing other people just how great you are. I’ve been there. I know firsthand what happens when we obsess with perfection and seek admiration for those successes.

But here’s a issue: no matter how smart you think you are, or how hard you work, there will always be someone who is smarter and works harder than you. It’s not a zero-sum game by any means (you can both be successful!), but if you constantly try to be “the best”, there are others out there who will make a bigger sacrifice or give up more in their lives for a narrower set of goals than you.

Most of us want a variety of richness in our lives: satisfying careers, a thriving family, health and well-being, some time for fun, entertainment, curiosity, contemplation. But to be “the best”, you must sacrifice more general success in various areas of your life towards your more focused and narrow goal — because if you don’t, someone else will.

I first had this realization this when I started working full time, shortly after earning my PhD and becoming a father in the same month. I was not even in my first year on the job when I found it hard to balance a demanding job and being a good father and husband. I remember in my very first year having to work late on my wife’s birthday — ugh! It became quickly apparent to me that different colleagues at the office were willing to tolerate very different levels of sacrifice in other areas of their lives for success at work. And it dawned on me: To be “THE BEST!”, you have to make bigger sacrifices than everybody else. The guy or gal who succeeds the most at the office will be the one who puts work above all else. It’s not a complaint or a negative thing, it’s just a reality. If I prioritize work over other aspects of my life, I will have more success at work and less success elsewhere.

Case in point: I read Andre Agassi’s autobiography Open a few years back. He describes his childhood that consisted of daily tennis practice with his Dad in the backyard – grueling, day-after-day sessions with the ball machine on its highest setting. He cried every day. He resented his father. He nearly quit multiple times. And he went on to become one of the best players in the world. Was it worth it? Hard to say. He has, by nearly any standard, lived an exceptional life — a life to admire, a life to respect. But what has he missed out on as a result? If he were injured in his early 20s, before his exceptional career, would it still have been worth it? Similar stories are often told of Tiger Woods and the Williams’ sisters.

I’m not saying that aiming for greatness is necessarily a bad thing. It can be a beautiful and worthwhile pursuit. But just be cognizant of what being the best requires and what trade-offs you’re making. If you self-identify with greatness and wish to make your life about pursuing that greatness, I truly do applaud and admire that path. But you give up a lot. For most of us, settling for “good enough” is a better approach, at least in the long run. There might be periods of your life when striving for greatness sharpens your skills in ways that serve you well throughout life. But spending 30 years pursuing career greatnesss, if it comes at the expense of other aspects of life, doesn’t seem worth it to me.

Instead, take time to play every day (see James Altucher’s All I Want To Do is Play), be a satisficer rather than a maximizer (see research by psychologist Barry Schwartz), and lead a life that is fulfilling in many different dimensions — one that includes work, family, health, and fun. While I admire and respect people who choose to go “all in” on a particular dimension of their lives (e.g., the young talent who gives up everything to be a musician, the stay-at-home parent who devotes their whole selves to raising kids, etc.), I wouldn’t necessarily recommend those choices to my friends.

Here are a few parting thoughts and practical tactics to maintain balance in your life and aim for “good enough”:

Readers: Are there times in your life when you’ve struggled to become “the best”? How did it make you feel? Did you ever reach the top? What happened when you got there? Or did you eventually settle for “good enough”?